Victoria Government Takes A Leaf Out of Aurora’s Language Curriculum

Victoria Government Takes A Leaf Out of Aurora’s Language Curriculum

Since its inception, Aurora Early Education has had language sessions integrated into its curriculum with our children being given the opportunity to learn a second language through a variety of engaging programs and activities.

Now, the Victoria State Government has announced that as a part of the new Early Childhood Language Programm, 150 kindergartens across Victoria will offer children weekly language sessions.

Commenting on the initiative, the Minister for Early Childhood Education Jenny Mikakos said “We know that learning another language has great rewards – it’s fun, it improves brain function and actually helps kids learn English better too.” Indeed, several studies have found that learning a second language at a young age helps children develop cognitively; it encourages focus, perseverance, creativity and the ability to solve problems.

Aurora invests both time and resources to maintain a strong language program. We understand how learning another language can help our children develop both cognitively as well as culturally; as they are exposed to different languages, they learn about different cultures and become more tolerant and sensitive.

Aurora participates in the Early Learning Languages (ELLA)  program which uses The Polygots, apps which teach children language through immersive virtual experiences.  For instance, ‘The Polyglots In The Playroom’ takes children through experiences found in playrooms like mazes and sandpits, teaching them greetings, introductions, likes and dislikes in the new languages along the way. The Polygots apps teach a wide range of languages such as Indonesian, French and Spanish. Our educators use them mindfully as a tool to introduce Aurora children to vocabulary and common phrases in a new language. 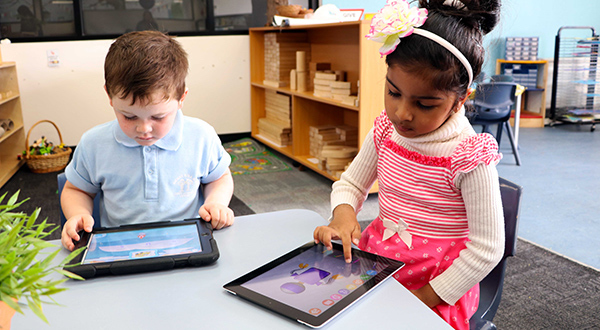 Our service also collaborates with LCF Mandarin where special educators from LCF use songs, dances and stories to teach our children Mandarin vocabulary. Children at Aurora enjoy these sessions and can sometimes be heard humming their favourite Mandarin songs through the week!

As well as being a fun experience for children, Aurora is confident that language activities in early childhood will enhance our children’s development; with the government’s new initiative we are looking forward to seeing more children reap the benefits of it as well.

Read more about the benefits of bilingualism here.