“An investment in knowledge pays the best dividends”
– Benjamin Franklin

Benjamin Franklin would know – as one of America’s founding fathers and the inventor of electricity, he demonstrated the immense power of investing in knowledge. Educators, pedagogists and parents have carried forward that idea today; a sound education which arms a child with knowledge and skills is equated with an investment, not just in their individual futures but in the future generation.

Early Education is especially important in this respect. Child psychologists have long advocated the immense impact that early childhood experiences can have on an individual’s development. An investment in early education, which is designed to give children holistic, dynamic experiences, ensures long lasting returns in the child’s life.

Early Education is an Everyday Investment

Think of dropping your child off at childcare everyday as a type of Systematic Investment Plan. For each day they are at an Early Education centre, they are interacting with educators and peers and enjoying experiences in an inspiring setting, which will enhance their growth.

At Aurora Early Education, we approach learning in a holistic matter, where educators collaborate with children to promote social, emotional, physical and cognitive development. We emphasise on mindfulness, early literacy and numeracy which enhances a child’s cognitive development. A wide range of equipment, dance, yoga and sports sessions promote motor coordination and development. Social skills are enhanced by a multitude of positive interactions and relationships between peers, learners and educators. 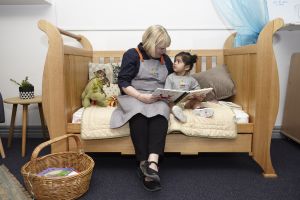 All of these key focus areas ensure that our learners have a ball of a time at the center, but are also investments that offers rich returns in terms of growth and skills in their later lives.

Indeed, several psychologists and studies have highlighted the benefits that early childhood education can have in later life – essentially, the dividends it will pay.
School students who were enrolled in early childhood education have made better academic progress. A study presented at the Melbourne Institute Public Economics Forum found that children who attended high-quality early learning programs are 40% ahead of their peers in as early as year 3. This pattern continues in later school years. Children who sit for Year Ten Examinations have better grades in English and Maths, as compared to children who were not enrolled in early education programs.
These achievements continue as individuals reach adulthood and aid them in securing high level employment as well as in enjoying nourishing, fulfilling social lives.

The concept of investment and economics go hand- in- hand. While an investment in good early childhood education programs primarily benefit children, their parents and their care givers , it also benefits society at large.

James Heckman, a Nobel Laureate, developed the Heckman Equation which shows the value of investing in early education for children. He has famously commented that the “economic future depends on providing the tools for upward mobility and building a highly educated, skilled workforce. Early childhood education is the most efficient way to accomplish these goals.”

High quality early childhood programes shape individuals who are proactive and dynamic, who are more likely to be employed and contribute to society and the economy. Additionally, children who have benefitted from Early Childhood Education are less likely to need special education, repeat grades or be in any other situation which may put a strain on government resources and on taxpayers.

The decision to enroll your child in early education can have far- reaching returns. At Aurora Early Education, we’re aware of our responsibility to our learners as well as society and the community as a whole. Choosing to enroll your child in our centre is one of the best investments you can make for their later lives; why not book a tour with us to learn more about our centre?